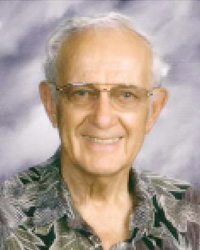 Emeritus professor Dr. Arthur R. King, Jr., visionary founder and long-time director of the Curriculum Research & Development Group (CRDG) at the University of Hawai‘i, died February 2 in Honolulu. He was 87.

King was born and raised in Portland, Oregon. His grandparents were among the wave of pioneers who traveled there from Kansas across the Oregon Trail in a covered wagon. He was the first member of his family to attend college, and he lived his life as a spirited and joyful champion of the best college-preparation, liberal arts education for all students.

King was a veteran of World War II in the Pacific where he served aboard the USS Guam as a naval officer. Following the war, he remained active in the US Naval Reserve until his retirement in 1981 at the rank of Captain after 37 years of service.

Having earned his BA from the University of Washington in 1943, King returned after the war to his formal education, studying at University of Hawai‘i’s Teacher’s College and teaching at Punahou School from 1946 through 1949. He completed an MA and EdD at Stanford University and then served as Director of Curricular Services for the Sonoma County Schools. In 1955, he joined Claremont Graduate School as an associate professor of education where he remained until 1965.

King returned to the University of Hawai‘i in 1965 as a member of the research faculty in the College of Education. In 1966, he and John A. Brownell produced their groundbreaking book The Curriculum and the Disciplines of Knowledge: A Theory of Curriculum Practice, articulating the theory that each of the disciplines of knowledge had its own mode of inquiry, specialized language, heritage of literature and artifacts, and traditions, and that the community of scholars these domains created should be the basis for liberal and general education. King was able to put his theory into practice when Dean Hu Everly charged him with reorganizing and repurposing the University Laboratory School to create a center for curriculum development. The center he created and directed for nearly forty years was based on the notion of the classroom as a community of scholars and cast each student into the role of authentic practitioner. The work that he led, and that CRDG continues to do, has resulted in cutting edge research, curricula based on inquiry within the disciplines of knowledge, and professional development programs that have impacted generations of educators in Hawai‘i and around the world.

Following his retirement in 2003, King remained active in the CRDG family, writing a history of the unique experiment that became CRDG and University Laboratory School and developing a thesis on schools as systems. His belief in and commitment to a quality liberal arts education for all sustained him through political and economic challenges and is the foundation of CRDG’s enduring success. The depth and breadth of his knowledge and leadership, along with his vision for creating and sustaining a university-based R&D center with a real-time school as a laboratory remain the foundations of the internationally recognized organization he created and led for so many years. In his retirement, King continued to hone his craft as a woodworker at the Fort Shafter wood shop, where he was especially well known for his fine handcrafted bowls made of koa. He also became an active member of the Arcadia retirement community, where he served on its Wellness Committee and contributed important work on the prevention of falls.

King was devoted to his family and is survived by his wife of sixty-four years, Mildred King. He leaves three children, Marsha, Nancy, and David; four grandchildren, Daniel, Erin, Adam, and Caitlin; and six great grandchildren, Payton, Darren, Claire, Madeline, Emmaline, and Wilson. He is also survived by his sister, Faye McGrath, four nephews, a niece and many, many friends.

King will be interred with full military honors in a private ceremony at the National Memorial Cemetery of the Pacific (Punchbowl). A memorial service will be held at Arcadia Retirement Residence on Saturday, February 21 at 10:00 a.m.

In lieu of flowers, the family requests that contributions to continue his work may be made to the Arthur R. King, Jr. Scholarship Fund through the University of Hawaii Foundation, 2444 Dole Street, Bachman Hall #105, Honolulu, HI 96822.

Congratulations to CRDG’s Dean Lodes as second author on a paper published with the VR team in Presence, The MIT Press Journals. This highlights the Hōkūle‘a as the focus of the VR work and links it to classroom usage. Read article: Kilo Hōkū—Experiencing…
END_OF_DOCUMENT_TOKEN_TO_BE_REPLACED

UH Mānoa College of Education (COE) Assistant Specialist Joanna Philippoff was awarded $44K from the University of Hawai‛i Sea Grant College Program. As part of the two-year grant project, Philippoff and Co-Directors Heather Spalding of the Botany Department and Craig Nelson of…
END_OF_DOCUMENT_TOKEN_TO_BE_REPLACED

Congratulations to CRDG’s Dean Lodes as second author on a paper published with the VR team in Presence, The MIT Press Journals. This highlights the Hōkūle‘a as the focus of the VR work and links it to classroom usage. Read article: Kilo Hōkū—Experiencing…
END_OF_DOCUMENT_TOKEN_TO_BE_REPLACED

UH Mānoa College of Education (COE) Assistant Specialist Joanna Philippoff was awarded $44K from the University of Hawai‛i Sea Grant College Program. As part of the two-year grant project, Philippoff and Co-Directors Heather Spalding of the Botany Department and Craig Nelson of…
END_OF_DOCUMENT_TOKEN_TO_BE_REPLACED

“How lucky that this position satisfied both appetites for art and technology!” Hometown: Born in Honolulu raised in Waipahu Department: Curriculum Research & Development Group, MaPS Degree: Bachelor of Fine Arts, UHM How long have you been with CRDG? I…
END_OF_DOCUMENT_TOKEN_TO_BE_REPLACED