Reading Aloud and the Golden Triangle 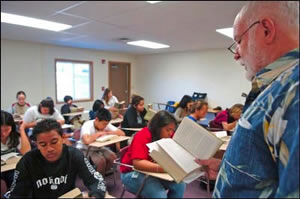 Chins rest on hands and eyes scan the pages before them in rapt attention. The room is silent except for the sound of Jim Harstad’s melodious voice, rising suddenly to sharp bursts of Harry Potter dialogue and then back to a weaseling voice for sly Professor Snape as he reads out loud from the popular series.

For an hour each morning, the eighth-grade students in Harstad’s Language Immersion program at the Education Laboratory — better known as the Lab School — are transported to the magical world of student wizards struggling with the forces of evil and adolescence.

At the same time, they are subconsciously recognizing verbs and nouns and predicates and clauses — absorbing language and literature in a way designed to make them accomplished readers and fluid, fluent writers.

“Normally, kids would be sitting there thinking it’s boring,” says 13-year-old Grant Christopher, who figures these hour-long lessons of “reading along” with their teacher help give students more interest in reading.

“It helps them pay attention and be involved.”

The successful program Harstad and his wife, Cheryl, developed over 30 years of teaching is called the Golden Triangle. While it has yet to make the leap to mainstream public schools in any major way, it was developed through the University of Hawai’i’s Curriculum Research and Development Group, and is finding much success in charter and alternative schools among middle- and high-school students.

It’s a three-pronged approach that includes five minutes of journal-writing or free-writing at the start of class to improve the ability to express thoughts; a second five-minute segment devoted to analyzing a new sentence each day; and the remainder of class time is for reading aloud together. “Students tend to think books are dead things … I want to bring them to life,” says Harstad, who retired from teaching five years ago but has come out of retirement to teach two Golden Triangle classes at the Lab charter school.

There’s nothing new about any of the program’s components, but the strength of this approach is using them all together and extending them through middle and high school. Teachers have always read aloud to children in elementary grades, but many believe it becomes more of a challenge — and less of a necessity — in the higher grades. Harstad disagrees, saying focusing on middle-schoolers in particular can be a key intervention point.

“That’s the point when most students’ verbal scores start falling off,” he says. “But our kids’ scores don’t. Our kids keep picking up speed.” But he also recognizes the program could tax any teacher expected to handle five or six sections of English because of the sheer physical strain. “I’ve done the program with as many as four classes a day for a full year, and it’s a real workout.”

Department of Education officials say individual schools interested in the program are free to implement it. But new programs also can officially apply for evaluation by the department and for an analysis of whether they’re aligned with the Hawai’i Content and Performance Standards. By fall, the department will be sending letters asking language arts programs to submit applications to the department for evaluation so the DOE can come up with a new “recommended” list of programs, including those that align with the latest standards.

Harstad’s approach runs counter to the momentum in education of increasing the amount of testing, much of which is being driven by the national No Child Left Behind Act, which mandates all students be proficient in core subjects by 2014. However, Hawai’i’s scores on the Hawai’i State Assessment, used to evaluate progress, show that students continue to struggle with reading.

Harstad says his approach may be unconventional, but it brings results.

“I don’t want them to sit there and prepare for a test,” he says. “I think that works against what we’re doing, which is to just enjoy the narrative. I explain ‘Look, you guys should be enjoying this. This should be fun for you.’ I don’t want them to come to books with the idea this is going to be a hard and difficult chore.”

The Lab School uses the program all the way from sixth through 12th grade. And the scores are proving its success.

Principal Peter Estomago agrees the Golden Triangle offers students exceptional training, teaches them that reading can be pleasurable, and has been one reason his school has been recognized as a national Blue Ribbon School for the past three years.

“Writing in their journals every day, we know it establishes confidence in their ability to write,” Estomago says. “When they get to college, it’s really kind of easy for them when they’re asked to write essays.”

In the past few years, other schools have begun picking up the program, either in part or whole. These include a small alternative school on Moloka’i that has seen students make huge strides in reading ability, and a couple of charters on the Big Island that also are seeing results.

“We have met the benchmarks for language arts from third through eighth grade,” says literacy coordinator Kaholo Daguman from Connections New Century Public Charter School in Hilo, which adopted the Golden Triangle schoolwide several years ago. The school has made Adequate Yearly Progress in reading, scoring higher than current requirements.

“Two years ago, 73 percent of our third-graders met proficiency when the benchmark was 44 percent,” Daguman says.

“It’s a common-sense program, especially if you have a lot of kids who aren’t strong readers,” says lead teacher Prana Mandoe.

“Assigning them to go and read something on their own is not a good idea if they’re not strong readers, because the kids who hate to read don’t do it. So when we read aloud to them and they’re reading along, it’s a good way to help them experience the pleasure of reading. The students enjoying the story in class are the same students who would not go home and read it.”

Mandoe says after initial complaints from students about having to write in journals every day, she has seen rapid improvement. “They’re getting a lot of experience in expressing their thoughts on paper,” she says. “I’ve seen enormous growth in their ability to put their thoughts down and their use of precise and vivid language.”

At the Lab School, teacher Marybeth Hamilton is a product of the school and its teaching methods, and has come back to teach them to a new generation.

She remembers what it was like as a student sitting in class as her teachers read novels aloud, with the class following along.

“I remember just the pure enjoyment of reading and hearing the story read,” Hamilton says. “I know it greatly prepared me for college. You could give any of my classmates a topic to write about and we would do it. We would just write.”

Congratulations to CRDG’s Dean Lodes as second author on a paper published with the VR team in Presence, The MIT Press Journals. This highlights the Hōkūle‘a as the focus of the VR work and links it to classroom usage. Read article: Kilo Hōkū—Experiencing…
END_OF_DOCUMENT_TOKEN_TO_BE_REPLACED

UH Mānoa College of Education (COE) Assistant Specialist Joanna Philippoff was awarded $44K from the University of Hawai‛i Sea Grant College Program. As part of the two-year grant project, Philippoff and Co-Directors Heather Spalding of the Botany Department and Craig Nelson of…
END_OF_DOCUMENT_TOKEN_TO_BE_REPLACED

Congratulations to CRDG’s Dean Lodes as second author on a paper published with the VR team in Presence, The MIT Press Journals. This highlights the Hōkūle‘a as the focus of the VR work and links it to classroom usage. Read article: Kilo Hōkū—Experiencing…
END_OF_DOCUMENT_TOKEN_TO_BE_REPLACED

UH Mānoa College of Education (COE) Assistant Specialist Joanna Philippoff was awarded $44K from the University of Hawai‛i Sea Grant College Program. As part of the two-year grant project, Philippoff and Co-Directors Heather Spalding of the Botany Department and Craig Nelson of…
END_OF_DOCUMENT_TOKEN_TO_BE_REPLACED

“How lucky that this position satisfied both appetites for art and technology!” Hometown: Born in Honolulu raised in Waipahu Department: Curriculum Research & Development Group, MaPS Degree: Bachelor of Fine Arts, UHM How long have you been with CRDG? I…
END_OF_DOCUMENT_TOKEN_TO_BE_REPLACED