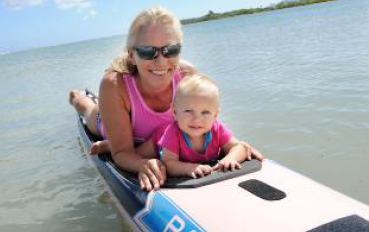 When the ocean is one’s back yard, there is no excuse not to go out and play. And play hard.

It’s who Kanesa Duncan Seraphin has always been.

Water was the hook that caught her as a child growing up in northern California, the liquid that put the “lure” into alluring.

At 38, the Kauai resident’s resume is as heavy on the academic — a Ph.D in zoology — as it is on theathletic — a former nationally ranked swimmer and triathlete, and one of the most successful female paddleboarders the sport has known.

Duncan Seraphin has eight Molokai-2-Oahu World Championship women’s prone paddleboard titles in 12 crossings of the Kaiwi Channel. Fourteen months after the birth of daughter Laola, she goes for No. 9 on Sunday.

The reasons are as numerous as the scalloped hammerhead sharks she studied for her doctoral dissertation on the effects of nursery habitat use on ecology and population genetic structure of the sphyrna lewini.

It’s as basic as the “because it’s there” often espoused by the late legendary surfer Andy Irons. It’s as profound as the desire to complete the journey for those who no longer can.

“I haven’t put in the miles that I normally would have but I wanted to do the race this year,” said Duncan Seraphin, director of the University of Hawaii’s Sea Grant College Program’s Center for Marine Science Education. “I want to paddle the channel, be out there for all the people who aren’t, the ones who have passed or are no longer competing. It’s for people like (legendary Australian waterman) Mick DiBetta who I’ve learned so much from, who is still competing at the highest level after all these years.

“It’s what our sport is about. It’s a personal challenge for the first person to the last person. I’m going to do the best that I can.”

She’ll do it for her daughter, who was born five weeks premature and delivered by emergency C-section after an infection was discovered.

“She was DOA, didn’t breathe for 7 minutes,” Duncan Seraphin said. “She made a crazy entrance into the world, flew to Oahu with dad (Thor Seraphin) that night and was at Kapiolani (Medical Center for Women and Children) for a while. But she’s doing great now.”

Laola will be waiting for mom along with tutu Karen Duncan at the Maunalua Bay finish line while husband Thor is on the escort boat. Duncan Seraphin will be easily spotted, on a new custom pink paddleboard shaped by Joe Bark and manufactured by Surftech. The unlimited class board is about six inches longer than a 14-foot stock board and with a straighter rocker line and fleshed-out nose.

“Another ‘magic board’ from Joe,” said Duncan Seraphin, who had a very successful run on her previous Bark board, the “Pink Panther.” “It’s fast and friendly and very stable. It’s a great board.

“My knee paddling is getting better but I still do a lot of belly riding. With the longer board you can connect the waves. The conditions are always changing across the channel. This lets you change with them.”

The Cal Poly San Luis Obispo graduate was born in Saskatchewan, Canada, and her name Kanesa comes from the Ojibwe tribe and means “sacred place.” The ocean has become that for her.

“What I like about paddleboarding is it’s you and the water,” said Duncan Seraphin, who was introduced to the sport via lifeguard rescue boards. “It’s about catching waves, going places. I came here in 1999 (for her master’s degree at UH) and the paddleboard community helped me become part of Hawaii.”

The field of 190 represents more than 20 countries and is stacked with talent and tradition. Mercer is seeking an unprecedented fourth straightmen’s prone title.

Australian Travis Grant also returns to defend his title in the SUP division and will be tested by Maui’s Connor Baxter and Kai Lenny, ranked 1-2 in the SUP World Tour standings. Big-wave surfer Dave Kalama, who turns 50 this year, has come out of retirement, looking to add a second title to the one he won in 2010.

Two-time defending prone champion Brad Gaul of Australia will team with Down Under surfing legend Tom Carroll in the two-man team division.

Congratulations to CRDG’s Dean Lodes as second author on a paper published with the VR team in Presence, The MIT Press Journals. This highlights the Hōkūle‘a as the focus of the VR work and links it to classroom usage. Read article: Kilo Hōkū—Experiencing…
END_OF_DOCUMENT_TOKEN_TO_BE_REPLACED

UH Mānoa College of Education (COE) Assistant Specialist Joanna Philippoff was awarded $44K from the University of Hawai‛i Sea Grant College Program. As part of the two-year grant project, Philippoff and Co-Directors Heather Spalding of the Botany Department and Craig Nelson of…
END_OF_DOCUMENT_TOKEN_TO_BE_REPLACED

Congratulations to CRDG’s Dean Lodes as second author on a paper published with the VR team in Presence, The MIT Press Journals. This highlights the Hōkūle‘a as the focus of the VR work and links it to classroom usage. Read article: Kilo Hōkū—Experiencing…
END_OF_DOCUMENT_TOKEN_TO_BE_REPLACED

UH Mānoa College of Education (COE) Assistant Specialist Joanna Philippoff was awarded $44K from the University of Hawai‛i Sea Grant College Program. As part of the two-year grant project, Philippoff and Co-Directors Heather Spalding of the Botany Department and Craig Nelson of…
END_OF_DOCUMENT_TOKEN_TO_BE_REPLACED

“How lucky that this position satisfied both appetites for art and technology!” Hometown: Born in Honolulu raised in Waipahu Department: Curriculum Research & Development Group, MaPS Degree: Bachelor of Fine Arts, UHM How long have you been with CRDG? I…
END_OF_DOCUMENT_TOKEN_TO_BE_REPLACED