While the production and delivery of research-based curriculum and professional development programs are at the heart of CRDG’s mission, it has also engaged in a variety of other work in the educational community that contributes to improving educational practice. In this section, you will find a range of programs that serve students, teachers, and community members, and that describe CRDG’s integral place in the educational research community locally, nationally, and internationally. 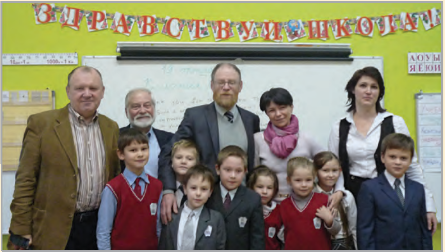 In 1993, CRDG began a collaboration with Russian educators at the invitation of leaders in the Russian Academy of Sciences to develop inquiry-based science education in Russia. The Academy’s Dr. Alexander Uvarov, then Head of the Laboratory for Telecommunications in Education, met John Southworth at an international telecommunications conference in Moscow at which Southworth introduced CRDG’s award-winning science program Foundational Approaches in Science Teaching (FAST). Intrigued by FAST, Uvarov was able to secure funding to sponsor the first FAST professional development institute in Moscow in the summer of 1993. As a result, a Memorandum of Agreement was signed with the Russian Ministry of Education to translate FAST into Russian. CRDG provided support in adapting FAST, and the fully developed project (now known in Russia as The World Around Us) won approval of the Russian Ministry of Education for use in Russia’s schools. Today some 120 schools in Moscow, as well as schools in Voronezh, Ryazan, Barnaul, and Krasnoyarsk continue to use The World Around Us in their science courses.

Twenty years later that collaboration continues. Just as CRDG followed the development of FAST for middle school with the elementary school program Developmental Approaches in Science, Health and Technology (DASH), educators in Russia are now building on the success of The World Around Us by creating an adaptation of DASH in Russian for grades 1 to 4. In August 2012, the Institute of Open Education in Moscow sponsored two master teachers for an in-depth training in DASH at CRDG, which was conducted by Carol Ann Brennan. Elena Sokolova and Sergey Lovyagin, following their training in Hawai‘i, are leading a team of teachers in Moscow schools to pilot test the adapted DASH materials this academic year.

In October 2012, Donald Young traveled to Moscow at the invitation of Alexander Uvarov to participate in the International Scientific and Practical Conference on Science Education in the School of the Information Age, where he delivered a presentation on science and engineering in early education. At the same conference Young participated in two panel discussions along with science teachers from Russia. The first was a 20-year retrospective of the collaborative work on FAST. The second panel focused on the recent developments in adapting DASH for Russian schools. Following the conference, Young also conducted a one-day workshop on DASH grade 1 inquiry science investigations for the master teachers participating in the DASH in Russia project and other administrative officials and policy makers. A Memorandum of Agreement has now been signed between CRDG and the Institute of Open Education to continue the adaptation of DASH. In support, Brennan has been invited to provide three weeks of training in DASH in Russia in the summer of 2013. 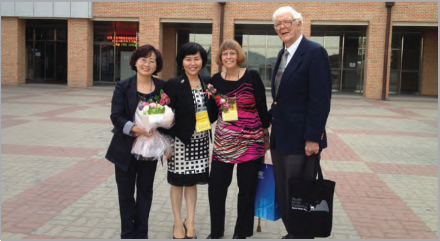 CRDG’s Frank Pottenger and Carol Ann Brennan were featured as keynote speakers at the International Seminar for the 65th Anniversary of Dankoo University in Seoul, Korea in June. The seminar—co-sponsored within the Dankook University College of Education by the Institute for Education of School Subjects, the Science Education Research Institute, and the Special Education Research Institute—focused on the theory and practice of STEAM (Science, Technology, Engineering, Arts, and Mathematics) integrated education, a core focus at the elementary, middle, and high school levels in Korea.

Pottenger’s keynote, “Inquiry: A Mechanism for an Articulated Curriculum,” addressed his research into inquiry as an operation of the mind. Brennan’s presentation described her work on applying the theories of inquiry from Pottenger’s research. In Evidence of Inquiry in Early Childhood Education, she described her research on inquiry conducted over the past several years with the UH Mānoa Children’s Center. Pottenger had worked previously with Dankook Professor of Education Dr. Yeon-A Son, one of the primary organizers of the conference, when she spent two years at CRDG in a postdoctoral research position in science education. 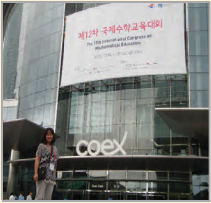 CRDG’s Linda Venenciano presented the results of her studies on the long-term effects of the Measure Up elementary mathematics project at the 12th International Congress on Mathematical Education (ICME-12) in Seoul, Korea, in July. CRDG began the Measure Up project in 2001. The mathematics of Measure Up builds on the El’konin- Davydov Russian curriculum and uses a measurement context to structure how mathematical concepts are introduced. Studies are underway to examine how this curriculum affects students’ algebraic thinking and reasoning skills.

The ICME-12 allows for high levels of interaction among researchers from around the world. During the congress, Venenciano connected with researchers from Goethe-University in Frankfurt, Germany, who are familiar with the Measure Up project and pursuing related work in their country. They have recently expanded the collaboration to include researchers in Naples, Italy, who are also pursuing work with the Davydov approach. 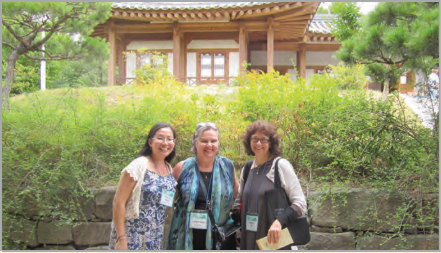 As a founding member of the Pacific Circle Consortium (PCC), CRDG has had a long-standing commitment to education in and about the Asia-Pacific region. The PCC was established in 1977 as an initiative in international cooperation among educational research and development institutions in the Pacific region and has produced many collaborative curriculum projects and policy papers in its thirty-five years. This year, CRDG headed a project to look at the organization as it had evolved in light of the issues facing the region today, and to begin a discussion about what makes the PCC unique and how it can best position itself to continue to serve the region well into the twenty-first century. The initial report was presented at the PCC’s annual meeting at Ehwa Women’s University in Seoul, Korea, to the membership, currently drawn from Australia, New Zealand, Fiji, Sāmoa, Vietnam, Korea, Taiwan, Japan, Mexico, the Netherlands, and several US states. CRDG will host the upcoming meeting in Honolulu in 2013.

Congratulations to CRDG’s Dean Lodes as second author on a paper published with the VR team in Presence, The MIT Press Journals. This highlights the Hōkūle‘a as the focus of the VR work and links it to classroom usage. Read article: Kilo Hōkū—Experiencing…
END_OF_DOCUMENT_TOKEN_TO_BE_REPLACED

UH Mānoa College of Education (COE) Assistant Specialist Joanna Philippoff was awarded $44K from the University of Hawai‛i Sea Grant College Program. As part of the two-year grant project, Philippoff and Co-Directors Heather Spalding of the Botany Department and Craig Nelson of…
END_OF_DOCUMENT_TOKEN_TO_BE_REPLACED

Congratulations to CRDG’s Dean Lodes as second author on a paper published with the VR team in Presence, The MIT Press Journals. This highlights the Hōkūle‘a as the focus of the VR work and links it to classroom usage. Read article: Kilo Hōkū—Experiencing…
END_OF_DOCUMENT_TOKEN_TO_BE_REPLACED

UH Mānoa College of Education (COE) Assistant Specialist Joanna Philippoff was awarded $44K from the University of Hawai‛i Sea Grant College Program. As part of the two-year grant project, Philippoff and Co-Directors Heather Spalding of the Botany Department and Craig Nelson of…
END_OF_DOCUMENT_TOKEN_TO_BE_REPLACED

“How lucky that this position satisfied both appetites for art and technology!” Hometown: Born in Honolulu raised in Waipahu Department: Curriculum Research & Development Group, MaPS Degree: Bachelor of Fine Arts, UHM How long have you been with CRDG? I…
END_OF_DOCUMENT_TOKEN_TO_BE_REPLACED